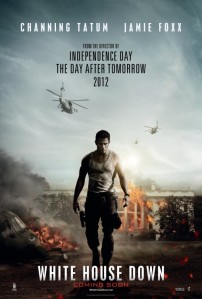 In the grand tradition of silly action premises that aim to be crowd pleasers, like Die Hard, Con Air, or The Rock, comes White House Down. The idea that a small group of highly trained ex-soldiers could take over the White House, and blow up Congress, is basically the premise of the action film. And the idea that Channing Tatum could save the President? Well, that’s the silly part.

John Cale (Channing Tatum) is a capital police guard assigned to protect the Speaker of the House (Richard Jenkins). He dreams of one day being a secret service agent and getting to protect the President (Jamie Foxx). The President has just ordered the removal of all military troops from the middle east, which is causing a lot of turmoil and controversy from other countries, as well at home. His team (including Maggie Gyllenhaal) are supportive. The President’s head of security (James Woods) is also retiring this week, after 25 years of service. This is the day that John Cale also has his interview to become a secret service agent and he brings his daughter (Joey King) with him. His daughter is a political blogger (at age 11), so this is a dream come true for her. She even gets a chance to meet the President while on the tour, and gets him to record a message for her blog. Cale is told in his interview that  he isn’t qualified to be a secret service agent, but before they can leave, shit goes down.

A highly trained special ops team, led by Stenz (Jason Clarke) takes over the White House, with the help of someone on the inside (I won’t spoil it, even though it’s obvious from the moment they are introduced as a character). The special ops team manages to kill all the secret service agents on the inside, but since Cale isn’t secret service, he catches them off guard. Cale then spends the rest of the movie trying to rescue/keep the President safe, and also rescue his daughter, who he got separated from. Helping him from the outside are Gyllenhall, Reddick, and his old boss, the Speaker. Teams scramble to secure the Vice President and the Speaker, in case they need a new President.

This is a pretty typical action film, where a fairly average guy (with military training of course) is put in an extreme situation, and only he can save the day. Obviously, at the end of the movie, he finds himself with his dream job. It’s like Training Day from hell. The plot of this film is clearly not plausible, and you have to check your brain at the door (don’t worry, you’ll get it back when you leave), but if you want a well-paced predictable action movie that is surprisingly fun, then White House Down won’t disappoint you. It’s far from being the smartest film of the year, and even far from being the smartest action movie of the year. No one will ever call this film smart, or intricate, or anything like that. But they might call it fun, occasionally funny, and a good showcase for Channing Tatum as an action star, as well as Jamie Foxx in a somewhat humorous role. Surprisingly, Foxx is very Presidential. I wasn’t expecting that.

I enjoyed it. You’ll enjoy it. You can probably even wait to catch this on DVD if you want. The special effects are pretty standard, in terms of “blowing shit up”, so it’s not like you HAVE to see this on the big screen. I’d say it’s worth a watch at some point though.