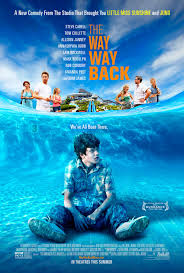 WRITTEN AND DIRECTED BY: Nat Faxon and Jim Rash

I think it is just mere coincidence that my two favorite films of the summer, and of the year, are both coming of age tales. Earlier this summer, I enjoyed the wealth that the Kings Of Summer had to offer, and now I delight in reporting that The Way Way Back is equally fantastic. It embodies the heart of so many shitty family outings that I’m sure you endured, with a crazy ragtag group of people (much like LIttle Miss Sunshine, but actually more mainstream).

Duncan (Liam James) is a 14 year old boy forced to spend the summer with his newly divorced mom (Toni Collette), her boyfriend Trent (Steve Carell), and Trent’s airhead self-absorbed daughter Steph (Zoe Levin). It is clear from the beginning of the film that Trent is an asshole, when he tells Duncan that he’s a 3, on a scale of 1-10. They are spending the summer at Trent’s beach house. Trent’s neighbor, Betty (Allison Janney) is instantly friendly towards them, and introduces Duncan to her daughter, Susanna (AnnaSophia Robb), who he develops a crush on, despite her being friends with Steph. Betty also has a son, Peter (River Alexander), who has a lazy eye and gets constant crap from her about it. She’s trying to get him to wear an eye patch because he makes people uncomfortable.

Trent introduces them also to his old buddies, Kip (Rob Corddry) and Joan (Amanda Peet). While Duncan struggles to find something to do, his mom is off getting high and drunk with Trent and his friends. Duncan finally stumbles upon a water park, and forms a strong bond with the carefree manager, Owen (Sam Rockwell), who takes Duncan under his wing, and breaks him out of his shell. Owen’s staff (including writer/directors Nat Faxon and Jim Rash) help too, as does Owen’s frustrated love interest (Maya Rudolph), who just keeps wanting him to grow up. In the end, this is the summer that Duncan will never forget, and Owen (not Trent) will be the man to shape Duncan into who he will become.

Faxon and Rash made their stamp on the cinematic world by winning an Oscar for writing The Descendants. Since then, Rash spends his days as a series regular on Community, and Faxon’s Ben and Kate was cancelled last season. With this film, they both show that they have careers that will survive long beyond their struggling TV series. Not only are they strong writers, but they’re great directors as well. They find the heart of all the characters, and more importantly, the honesty. At first, Liam James’s Duncan might annoy you, because he’s so extremely introverted. But as the film unfolds, you get more of a sense as to why he is so extreme, and it feels less awkward as the film progresses. Carell is excellent playing against type as Trent, a douchy, might-be womanizer, who is both a terrible role model for Duncan, but also an important presence. Simply by being there, Trent allows Duncan to sympathize with his mom by the end of the film, and come to terms with the recent divorce and what that really means for his family.

The film lives and dies with Sam Rockwell as Owen, the fast talking, lazy, fun loving manager who sees something in Duncan that no one else sees, and finds a way of bringing it out. He’s like the shadow whisperer or something, as Duncan is the complete opposite of fun at the beginning of the film, but Owen changes that. This is the role that Rockwell was born to play, and he’s had so many great roles before this. I don’t know if it is showy enough to get him any award recognition, but I simply wouldn’t want anyone else in this role.

As you spend the end of your summer contemplating whether or not to suffer through The Smurfs 2, RIPD, or Grown Ups 2, I urge you to catch this film instead. It’ll be the easiest decision you’ll have to make.